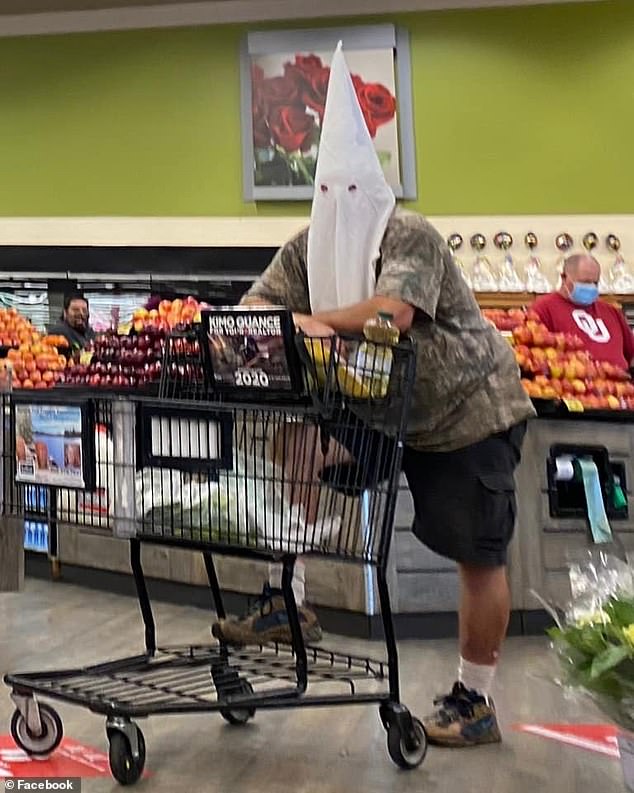 A man in San Diego County shocked fellow supermarket shoppers when he wore a KKK hood to a Vons store as a face covering — a move he later admitted was "stupid." Some patrons took photos of the man, who instead of wearing a common face mask chose to wear a symbol of the racist hate group. The incident drew outrage from local officials and civil rights groups, but the San Diego County sheriff's department announced on Monday they have no grounds to charge the man.

During questioning, the unnamed suspect "expressed frustration with the coronavirus and having people tell him what he can and cannot do," according to a statement from the San Diego County Sheriff's Department sent to CBS News.

"He said that wearing the hood was not intended to be a racial statement," the statement says. "In summary, he said, 'It was a mask, and it was stupid.'"

The Sheriff's Department also interviewed witnesses and reviewed video evidence from the store, ultimately determining there was insufficient evidence to charge the man with any crime, the department said in the statement.

"The U.S. Supreme Court has said that '[s]peech that demeans on the basis of race, ethnicity, gender, religion, age, disability, or any other similar ground is hateful; but the proudest boast of our free speech jurisprudence is that we protect the freedom to express the thought that we hate,'" the department says in the statement.

"That said, this incident should serve as a reminder for anyone contemplating wearing or displaying items so closely associated with hate and human suffering that our society does not hold in high regard those who do so," the statement continued. "Santee is a city of families, and the community is rightfully disgusted at this man's despicable behavior."

San Diego County requires cloth face coverings to be worn in public, such as when waiting in line to go inside a store, while shopping in a store, picking up take-out orders, and in other public settings.

After photos of the man shopping with the hood gained widespread attention online, the City of Santee mayor's office also issued a response to the incident. "There was an incident in Santee on Saturday where citizens photographed a male wearing attire that depicted a symbol of hatred. The citizens and Vons employees took steps to address the situation," the statement reads.

"Many thanks to all who stepped forward to curtail this sad reminder of intolerance. Santee, its leaders, and I will not tolerate such behavior. Santee and its citizens are great, and this particular individual's actions are not representative of us as a people and a wonderful city," the statement continues.

Anti-Defamation League (ADL) San Diego Regional Director Tammy Gillies also condemned the incident. "It's shocking yet not surprising that even during these challenging times, we see people emboldened to express hate. History teaches us that during times of crisis people are looking for a scapegoat," she said.