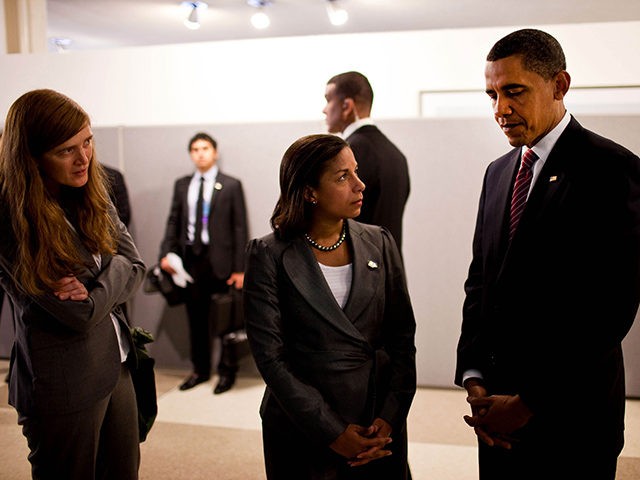 Grenell brought the list of officials to the Department of Justice last week, an unnamed official told the news outlet. No further details of the intelligence official’s visit to the Justice Department are known.

Samantha Power, Obama-era U.S. Ambassador to the United Nations (UN), is also believed to have made up to 260 requests to “unmask” U.S. citizens tied into surveillance of non-U.S. citizens, according to Fox News. She reportedly requested information seen in the days leading up to Trump’s inauguration. Then-Rep. Trey Gowdy (R-SC) later revealed Power testified that a portion of the “unmasking” requests made in her name were made by others.

ABC News’ report comes after the Justice Department dropped its criminal case against Flynn, who plead guilty to making false statements to the FBI regarding his contacts with Kislyak. The decision to drop its case comes after handwritten notes compiled by FBI officials questioned whether the “goal” was “to get [the Trump official] to lie, so we can prosecute him or get him fired.”

Ahead of the filing’s release, prosecutor Brandon Van Grack moved to withdraw from the case.

In an interview with CBS News, Attorney General William Barr defended the decision, saying he was “doing the law’s bidding.”

“A crime cannot be established here. They did not have a basis for a counterintelligence investigation against Flynn at that stage,” Barr said in reference to the FBI.

“People sometimes plead to things that turn out not to be crimes,” he added.

Obama told them he had “learned of the information about Flynn” and his conversation with Kislyak, where they discussed sanctions his administration had levied against Russia. (A memo penned by then-National Security Adviser Susan Rice also showed that Biden stayed behind as well.)

Obama “specified he did not want any additional information on the matter, but was seeking information on whether the White House should be treating Flynn any differently, given the information.”

In a leaked Friday call, Obama said the DOJ’s decision to drop its case against Flynn puts the “rule of law is at risk.”

“The news over the last 24 hours I think has been somewhat downplayed — about the Justice Department dropping charges against Michael Flynn,” Obama said during a virtual discussion with members of the Obama Alumni Association, according to an audio call obtained by Yahoo News.

“The fact that there is no precedent that anybody can find for someone who has been charged with perjury just getting off scot-free. That’s the kind of stuff where you begin to get worried that basic — not just institutional norms — but our basic understanding of rule of law is at risk. And when you start moving in those directions, it can accelerate pretty quickly as we’ve seen in other places.”

On Sunday, President Trump posted several messages stating Obama had been “caught” surveilling him and signaled the matter could be investigated.

“He got caught, OBAMAGATE!” the president tweeted.

He got caught, OBAMAGATE! https://t.co/oV6fum0zIS

“The biggest political crime in American history, by far!” he wrote in another message.

The biggest political crime in American history, by far! https://t.co/m5nPdUHt4u