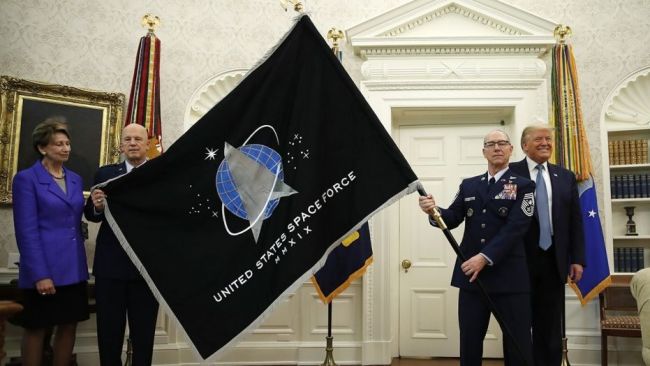 The flag of the nation's newest military branch was unveiled today (May 15) during a ceremony in the Oval Office. President Donald Trump watched as the flag was unfurled and designated it the official banner of the Space Force.

"Space is going to be the future, both in terms of defense and offense and so many other things," said Trump, who also signed the 2020 Armed Forces Day Proclamation during today's event. "And already, from what I'm hearing and based on reports, we're now the leader in space."

"This is really to unfurl the flag, but we’ve been doing this now for quite awhile," he added.

The flag itself is very dark blue, appearing almost black at first glance. It features three large stars and the Space Force's signature delta logo in the center. The flag reads "United States Space Force," and beneath that are the Roman numerals "MMXIX," or 2019, the year that the Space Force was officially "born."

This is the first new military flag released in 72 years. It will stand in the Oval Office alongside the flags from the other military service branches.