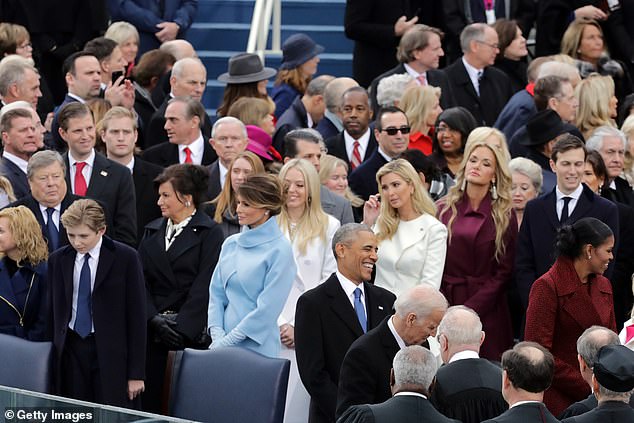 President Donald Trump complained that his three oldest children had been 'unmasked' in intelligence reports on his Inauguration Day in 2017, leading to questions about why Donald Trump Jr., Eric Trump and Ivanka Trump would be featured in them in the first place.

Trump made the charge about unmasking - which is when an anonymous name in an intelligence report is revealed - to Republicans senators during a closed-door lunch on Capitol Hill Tuesday, The New York Times reported.

It's unclear why Donald Trump Jr., Eric Trump and Ivanka Trump would be listed in intelligence reports on the 2016 campaign. 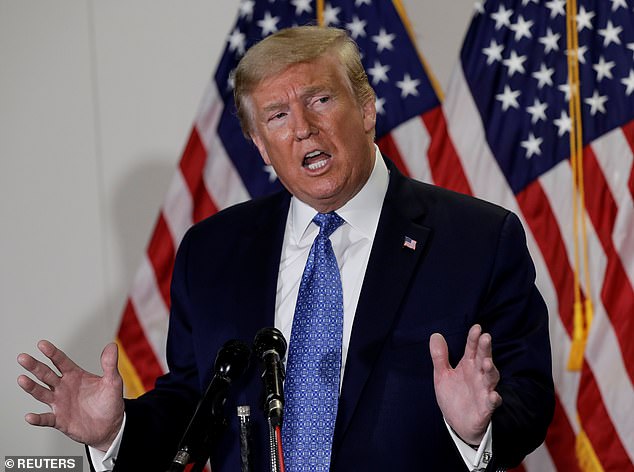 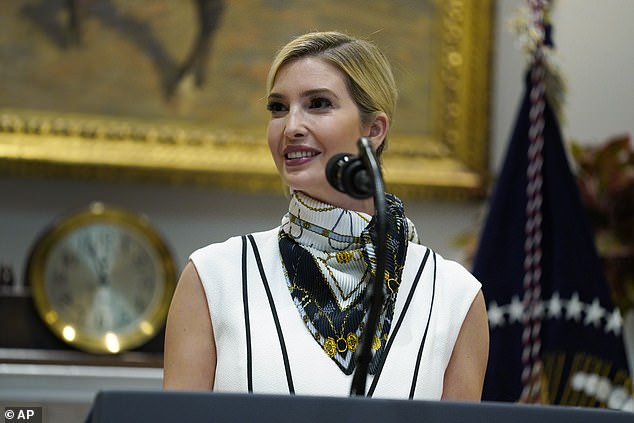 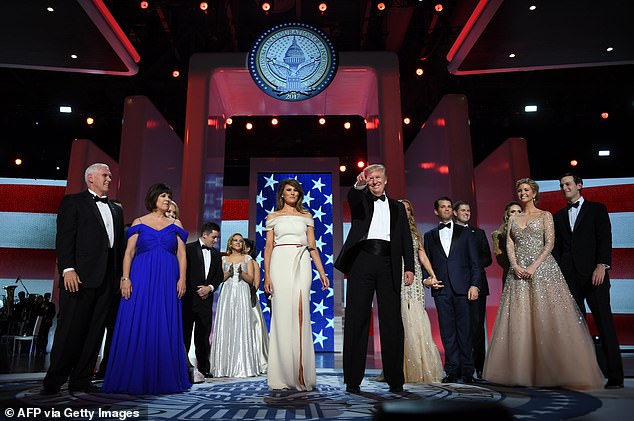 President Trump has accused former President Barack Obama of 'spying' on his 2016 campaign. The FBI was conducting a counterintelligence investigation into Trump's campaign to see anyone in that effort was coordinating, wittingly or unwittingly, with Russian officials trying to influence the election.

The president's grumbling came as Republican Sen. Lindsey Graham, one of Trump's closest allies on Capitol Hill, sent a letter to acting director of national intelligence Richard Grenell and Attorney General William Barr Tuesday, asking for any inquiries made by Obama administration officials that would have unmasked major players associated with Trump’s campaign in the weeks after Trump won the 2016 election.

Inauguration Day was the last day the Obama administration had the power to make such a request although that power ended at noon when Trump took the oath of office.

All three of Trump's eldest children played a role in the president's campaign, whether it was helping out with staffing it or campaigning for their father.

Graham chairs the Senate Judiciary Committee, which has jurisdiction over such matters. His request follows Grenell's declassification of the names of Obama officials who requested during the transition period that former National Securit Adviser Michael Flynn's name be unmasked.

'Given the extensive number of requests for the unmasking of General Flynn’s name during this short time period, it raises the question of whether these or other officials sought the unmasking of the identities of other individuals associated with the Trump campaign or transition team,' Graham wrote.

Trump has dubbed the unmasking 'Obamagate' in an attempt to gin up controversy around the move. Unmasking is not illegal and is a common practice in administrations.

The 2016 election and its fallout - including the investigation into Russia's role in that contest - was a hot topic for the president at the lunch with senators. 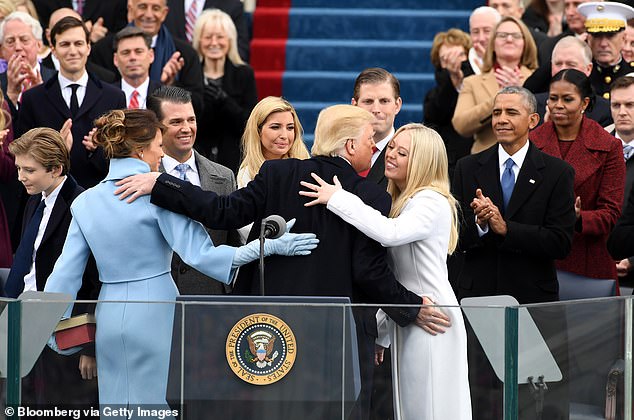 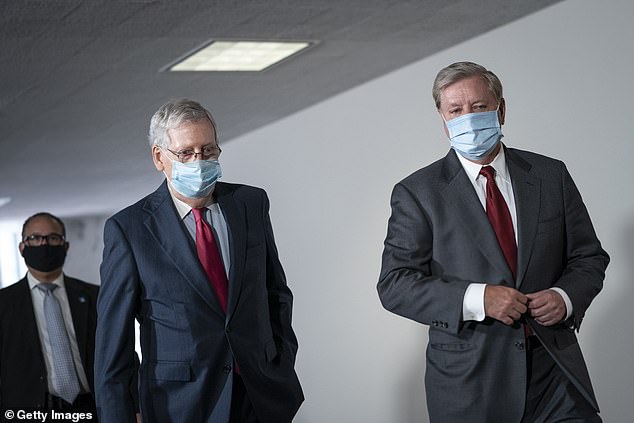 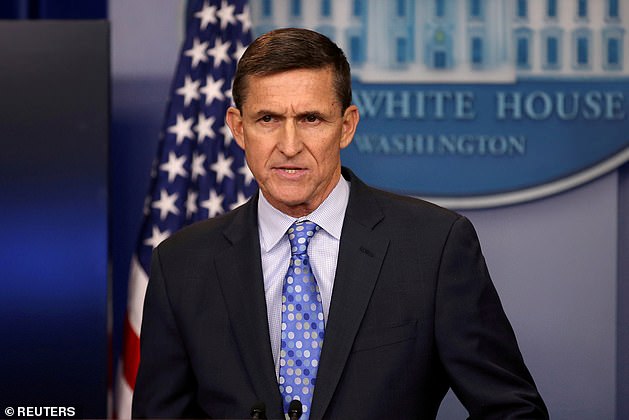 'We talked about the investigations into Russian involvement in the 2016 election and his concerns, which you’ve heard before which many of us share, about using the institutions like the FBI and the DOJ and others to undermine an incoming president,' Republican Senator John Cornyn told Politico.

Last week Graham took a pass on President Trump's call to haul in Obama for sworn testimony about what Trump calls 'Obamagate.'

'I am greatly concerned about the precedent that would be set by calling a former president for oversight,' Graham said Thursday after Trump put out the idea on Twitter. 'No president is above the law. However, the presidency has executive privilege claims against other branches of government.'

Graham pointed to the 'unusual times' as he summed up the state of play – even as he prepared to launch hearings into the Mike Flynn prosecution and the appointment of special counsel Robert Mueller.

A sitting president is accusing his predecessor 'of being part of a treasonous conspiracy to undermine his presidency,″ Graham said. 'We have the former president suggesting the current president is destroying the rule of law.'

Trump has pulled Obama into the 2020 election after it was revealed Biden was one of the officials who requested Flynn be unmasked.

Meanwhile, Obama, over the weekend, criticized President Trump in all but name during a televised commencement address for high school seniors.

Obama panned 'so-called grown-ups, including some with fancy titles and important jobs' who do 'what feels good, what's convenient, what's easy.'

'That's how little kids think,' he added, 'which is why things are so screwed up.'

He did not mention Trump by name but his meaning was clear.

As for the Flynn unmasking, a National Security Agency document signed by Director General Paul Nakasone lists Biden as among those who requested and may have received information on Flynn in the final days of the Obama administration or were otherwise involved in his unmasking.

The new unmasking document appears to reveal which official or officials ordered Flynn's name be 'unmasked' from intelligence reports, although it also includes hedging language. U.S. citizens have their names blacked out in such reports, although certain officials have the authority to unseal the information.

Trump last week pointed to comments by Biden that he didn't know details of the Flynn prosecution. 'He said he knows nothing about anything,' Trump said. 'And then it gets released today that he's the big unmasker.' 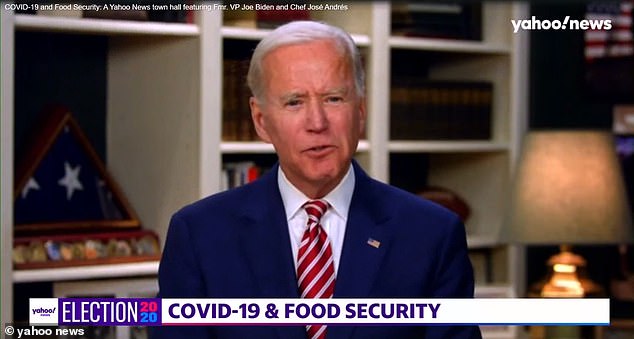 In Biden's case, he gained access to the documents on January 12, 2016 – a little over a week before he left office.

He is listed among a group of 'recipients who may have received Lt. Gen. Flynn's identity in response to a request processed between 8 November 2016 and 31 January 2017' to unmask an identity to unmask a name in an NSA intelligence report.

But the memo also refers to Biden as among a group of 'principals' – although it still stops short of confirming he ever saw the information.

'While the principals are identified below, we cannot confirm they saw the unmasked information. This response does not include any requests outside of the specified time-frame,' according to the memo.

Flynn's calls with former Russian ambassador to the U.S. Sergey Kislyak got picked up by U.S. intelligence intercepts during the transition, and became part of the Russia probe.

Flynn would later plead guilty to lying to the FBI about his undisclosed Russia contacts – although the Justice Department last week took the extraordinary move of seeking to drop the case. A federal judge is awaiting 'friend of the court' documents relating to the controversial case.

Trump's outburst came amid another signal that Flynn's case was far from over. Judge Emmet Sullivan has appointed an outside retired judge, John Gleeson, to provide arguments against the government's latest position dropping the charges against Flynn. Gleeson will also be charged with exploring whether Flynn should face perjury charges – a felony.

Under unmasking – which became a heated topic during the House Intelligence Committee's own Russia probe – the process begins when government officials are provided access to documents with classified information blacked out.

Certain senior government officials are granted the authority to seek 'unmasking' of individuals whose names are blacked out. Names are obscured to protect the privacy of U.S. citizens. To do so, they must put in a request to the classifying authority – in this case, the National Security Agency, which picks up information through a wide net of electronic surveillance.

Such requests are relatively routine – and are meant to provide a fuller understanding of the document at hand. However at the time of seeking an unmasking, the U.S. official does not know the identity of the 'masked' person.

If the request clears the agency's review process and is justified, the requesting official is provided access to the information. The government records who makes such requests and when, providing the opportunity to look back after the fact.

'Each individual was an authorized recipient of the original report and the unmasking was approved through NSA's standard process, which includes a review of the justification for the request,' the document said, indicating the spy agency signed off on the disclosures after a review.