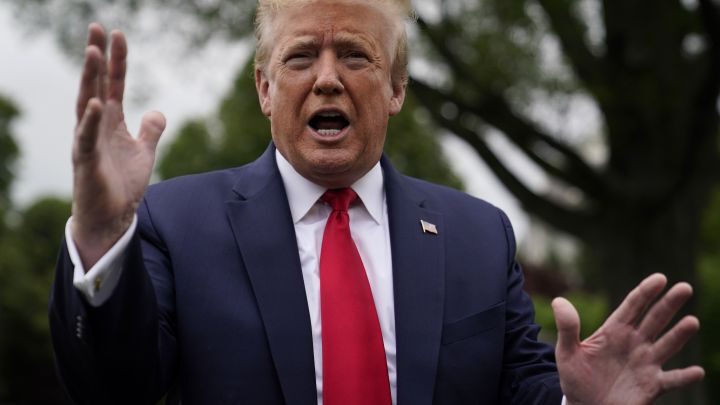 President Donald Trump announced at the White House on Friday that he would designate churches and other houses of worship as essential services.

Trump added that he would "override" governors who don't open up their houses of worship for in-person services, though he likely does not have the authority to do so because of the 10th Amendment, which delegates all powers not explicitly delegated to the federal government in the Constitution to the states.

"I call upon governors to allow our churches and places of worship to open right now," Trump said. "If there's any question, they're going to have to call me, but they're not going to be successful in that call.

"These are places that hold our society together and keep our people united. The people are demanding to go to church and synagogue, go to their mosque."

Trump argued that businesses like liquor stores and medical services like abortion clinics shouldn't have been reopened before religious institutions.

"The governors need to do the right thing and allow these very important, essential places of faith to open right now."

He added, "If they don't do it, I will override the governors."

The White House press secretary, Kayleigh McEnany, dismissed reporters' questions about the legality of forcing governors to reopen places of worship as a "hypothetical."

"You're assuming that governors are going to keep churches shut down and keep mosques shut down and keep synagogues shut down — that is a hypothetical question, and we'll leave it to these faith communities to reopen," McEnany said, adding, "We can all hope that this Sunday people are allowed to pray to their gods across this country."

McEnany said it was safe to reopen house of worship as long as they followed the new guidelines from the Centers for Disease Control and Prevention.

The White House had rejected the CDC's draft guidelines for reopening places of worship, as some officials found them too restrictive and others didn't want to release any guidance, The Washington Post reported on Wednesday.

Trump: The governors need to do the right thing and allow these very important essential places of faith to open right now. For this weekend. If they don’t do it, I will override the governors. In America, we need more prayer, not less. pic.twitter.com/Tmd2T5zB16