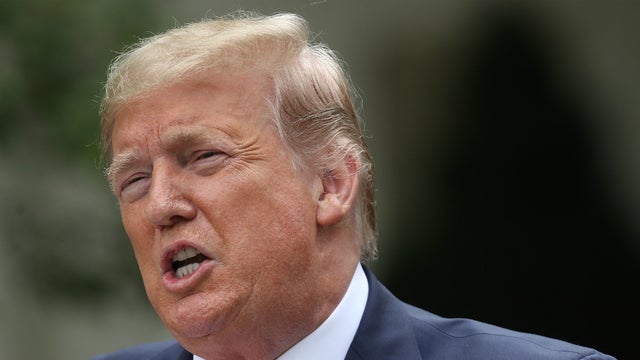 President Trump on Tuesday called on New York City to bring in the National Guard to quash protests after businesses were vandalized and looted a night earlier.

Trump, a native New Yorker, mocked Gov. Andrew Cuomo (D) and his brother, CNN anchor Chris Cuomo, in a tweet before urging the city to activate the National Guard.

"The lowlifes and losers are ripping you apart. Act fast! Don’t make the same horrible and deadly mistake you made with the Nursing Homes!!!" Trump tweeted, a reference to the high rate of infections and deaths from coronavirus in the state's nursing homes.

Trump in an earlier tweet complained that the governor "refuses to accept my offer of a dominating National Guard" before claiming Chris Cuomo's ratings were down.

NYC, CALL UP THE NATIONAL GUARD. The lowlifes and losers are ripping you apart. Act fast! Don’t make the same horrible and deadly mistake you made with the Nursing Homes!!!

The tweets were the latest instance of Trump pushing for state and local leaders to involve the National Guard and come down on protesters with a show of force. Earlier Tuesday morning, Trump hailed the "domination" of protesters in the nation's capital, where military police used tear gas and helicopters to disperse crowds before making arrests.

The National Guard is on standby in New York, but has not been activated. Trump on Monday urged governors nationwide to "dominate" their streets with National Guard deployments. If they refused, he said, he would send troops to American cities.

New York City imposed an 11 p.m. curfew Monday in an attempt to prevent protests from getting out of hand. While many demonstrators remained peaceful, the scene devolved into chaos as the evening wore on as looters broke into stores in Manhattan and vandalized businesses.

"There are justified peaceful protests across the state tonight," the governor tweeted on Monday. "But there are also people criminally exploiting this pain and this moment. We will not tolerate it."

The city announced Tuesday that an 8 p.m. curfew would remain in effect for the rest of the week.