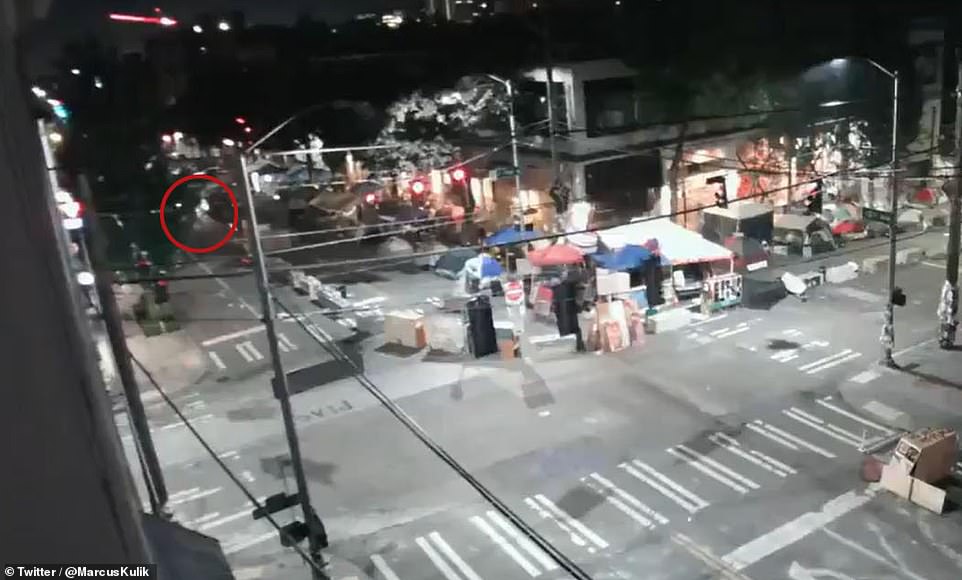 Surveillance video of a shooting at Seattle's CHOP zone that left a black 16-year-old boy dead and a 14-year-old seriously injured shows gunfire ringing out as the Jeep the teens were in plowed into a barricade and a man screaming: 'Oh you're not dead yet?'.

Homicide detectives said they are investigating after the two teenagers were shot in a white Jeep near a makeshift barrier around the Capitol Hill Organized Protest (CHOP) zone at about 3am on Monday.

Those inside the zone say CHOP security guards, who are self-appointed and heavily armed, started shooting at the Jeep only after the teens opened fire on them and drove into a barricade.

Police say witnesses told 911 dispatchers that they saw several unidentified people firing shots into the vehicle but made no made no mention of whether the teens were armed and fired first.

In surveillance video, multiple gunshots could be heard in the distance in the minutes before the Jeep could be seen tearing around the corner.

A female CHOP protester could be heard screaming for their self-appointed security to have their 'eyes up' because there were 'two people with guns' in a 'stolen white Jeep'.

When the Jeep came around the corner moments later, at least three loud gunshots could be heard before the teens crashed into the barricade. About a dozen shots were fired after the car crashed. It is not clear from the footage who the first gunshots came from.

A male could be heard in the surveillance screaming: 'Get on the ground', 'Oh you're not dead huh?' and 'You want to get pistol-whipped?'

Police said both teens were taken to the Harborview Medical Center in a private vehicle by people who identified themselves as 'CHOP medics' after the shooting.

They had already been taken to the hospital by the time police arrived at the scene.

The 16-year-old died several hours later and the 14-year-old remains in a critical condition. One of the victims had gunshot wounds to his hip, arm and temple.

Detectives searched the vehicle for evidence on Monday morning but said in a statement that it was clear the crime scene had been 'disturbed'.

Protesters say the shooting unfolded only after the teens started firing and their vehicle plowed into a CHOP zone barrier. Those inside the zone say CHOP security guards, who are self-appointed and heavily armed, returned fire.

'The protesters responded quickly with CHOP security returning fire hitting both the driver and passenger in the front seat,' a CHOP member, only known as Stitch, told DailyMail.com.

'I'm not certain if anyone else was hit by gunfire, there were bullets flying all over the place.'

Another person, who refused to give his name but claimed to have witnesses the incident, said police responded and did a cursory investigation before quickly leaving the scene.

Police were at the scene on Monday morning photographing blood-soaked evidence and the bullet-ridden jeep.

Police Chief Carmen Best said detectives had searched the jeep but it was clear people had gone into the vehicle before police could investigate.

'The typical things we search for in a case like this, or in a shooting like this, weren't there, and it was abundantly clear to our detectives - people had been in and out of the car after the shooting,' she said.

'Detectives are trying to get information from witnesses, but as has been the case in other crime scenes up in this area, people are not being cooperative with our requests for help.

Another person, who refused to give his name but claimed to have witnesses the incident, said police responded and did a cursory investigation before quickly leaving the scene

One of the wounded men was brought to the Harborview Medical Center at about 3.15am in a private vehicle before the second man was brought in about 15 minutes later by Seattle Fire Department medics

It is the fourth shooting in, or near, the CHOP zone in nine days.

Members of CHOP security openly carry around pistols and other weapons. One member has previously been seen brandishing an AK-47.

In a previous fatal shooting in the zone, a 19-year-old black man was killed on June 20 and a 33-year-old man was wounded.

Best said the violence that came just over a week after the other shooting in the zone was 'dangerous and unacceptable'.

'Enough is enough,' Best said. 'We need to be able to get back into the area.'

'Two African American men dead at a place where they claim to be working for Black Lives Matter. But they're gone, they're dead now and we've had multiple other incidents - assaults, rape, robbery, shootings - and so this is something that's going to need to change..

'We're asking that people remove themselves from this area for the safety of the people, if they care about people, they're going to have to try to help us to make it safe,' Best added. 'There are people who live here, there are multiple people being injured and hurt, and we need to do something about it. Is it absolutely irresponsible for this to continue.'

Demonstrators have occupied several blocks around the Seattle Police Department's East Precinct and a park for about three weeks after police abandoned the precinct following standoffs and clashes with protesters calling for racial justice and an end to police brutality.

The encampment is hailed by its supporters as an 'ideal society' where people help each other with food and medical care, but it has been derided by President Donald Trump as the home of 'thugs and anarchists'.

Trump has threatened to dismantle the zone with the help of federal forces.

The city of Seattle and Mayor Jenny Durkan made efforts to dismantle the CHOP last week.

Officials were forced to back away from the plans when a protester laid down in the street to block Seattle Department of Transportation crews and heavy machinery from removing barricades around the occupied zone.

Since then, negotiations between city leadership and organizers have broken down and hundreds of protesters have said they will refuse to leave the area until their demands have been met.

The blood-soaked and bullet-ridden jeep remained at the scene Monday morning. It is the fourth shooting in, or near, the CHOP zone in nine days

Members of CHOP security, who are self-appointed and heavily armed, openly carry around pistols and other weapons. One member has been seen brandishing an AK-47. Pictured is the bullet-ridden Jeep on Monday morning

Armed men are seen manning checkpoints controlling entry to the CHAZ. Police say they have received complaints that protesters are demanding cash to enter the zone, and shaking down businesses inside for 'protection money'

A man carrying an automatic weapon works security at a checkpoint to the so-called 'Capitol Hill Autonomous Zone' on June 10, 2020 in Seattle, Washington

The encampment has become more difficult to manage, drawing violence and a large homeless population since the onset of the occupation three weeks ago.

Nearby businesses and property owners filed a federal lawsuit against the city last Wednesday for its tolerance of the zone, saying officials had been complicit in depriving them of their rights to their property.

The businesses said they did not intend to undermine the anti-police-brutality or Black Lives Matter messaging of the protest but said they had limited access to their businesses.

They said they've sometimes been threatened for photographing protesters in public areas or for cleaning graffiti off their storefronts.

President Donald Trump has previously slammed the protesters and local lawmakers, telling Fox News last week: 'If they don't do something with Seattle, we're going to do that - we're going to go in there.

'Because what's happening, they're taking over American cities. In all cases, it's Democrats. They're Democrat-run, in all cases.'

Trump also tweeted: 'When are the thugs, looters, and anarchists moving out of the so-called 'Autonomous Zone' in Seattle? Get going!'.

Demonstrators have put their stamp on the area by redesignating Pine Street as George Floyd Way and covering the empty police building with Black Lives Matter materials.

The group's demands include releasing all jailed protesters, reducing the Seattle Police Department's budget by at least 50 percent.

They want that money to be used to fund causes including restorative justice, housing and healthcare.

The city of Seattle and Mayor Jenny Durkan made efforts to dismantle the CHOP last week. Officials had to turn back when a protester laid down in the street to block Seattle Department of Transportation crews and heavy machinery from removing barricades around the occupied zone

Nearby businesses and property owners filed a federal lawsuit against the city last Wednesday for its tolerance of the zone, saying officials had been complicit in depriving them of their rights to their property

The Seattle 'zone', which includes apartment buildings and businesses, also contains the Seattle Police Department's East Precinct, which cops abandoned after receiving a threat that the station would be overrun and burned down