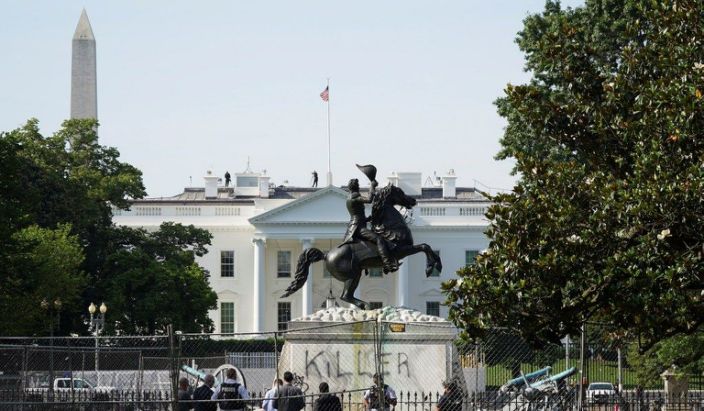 Federal authorities on Thursday reportedly arrested a male suspect they say was the “ringleader” of an effort to destroy a statue of Andrew Jackson near the White House.

Jason Carter, whom authorities said is connected to the loose knit anarchist group Antifa, was arrested Thursday morning at his home and charged with destruction of federal property, Fox News first reported. Carter allegedly led the June 22 effort to topple the statue in Washington D.C.’s Lafayette Square near the White House, which protesters said they attacked because Jackson owned slaves and because of his treatment of Native Americans.

“They were very organized,” an unidentified federal law enforcement official told Fox News. “Carter was on top of the statue and directing people.”

“They had acid, chisels, straps and a human chain preventing police from getting to the statue,” the official said.

The Justice Department on Saturday announced that four other men face felony destruction of federal property charges for their roles in attacking the statue. According to the department, the four were caught in video footage attempting to pull the statue to the ground.

President Trump on Friday signed an executive order to protect American monuments, memorials, and statues in the wake of recent attacks on several monuments of historical figures in cities around the country.

“Long prison terms for these lawless acts against our Great Country,” Trump wrote in a tweet announcing the order.

At least a dozen other monuments to historical figures have also been targeted, including several Christopher Columbus statues. Statues of Columbus were attacked in recent weeks in Virginia, Massachusetts, and Minnesota as protests continue against racism and police brutality in the wake of the death of George Floyd, a black man who died in police custody in Minneapolis.