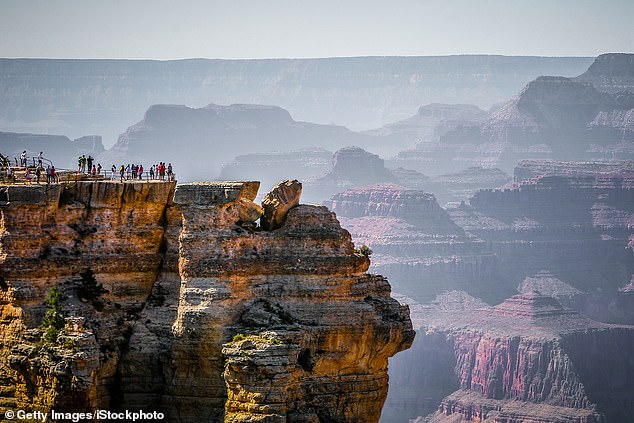 An Arizona woman has fallen 100 feet to her death while taking photos at the Grand Canyon.

Maria A. Salgado Lopez, 59, of Scottsdale, Arizona, died on Friday near the South Rim visitors center. Her body was retrieved later that day.

Salgado Lopez was hiking and taking photos with family members when she accidentally stepped off a ledge and fell.

The death was the second at the park in recent weeks.

On June 26, Catherine Houe, 49, of Daly City near San Francisco, died after suffering heat-related symptoms on a 114-degree day.

The first death last year was not the result of a fall, according to Vanessa Ceja-Cervantes, a spokeswoman for the Grand Canyon National Park.

She said the victim was a foreign national and that the body was found on March 26 in a forested area south of the South Rim Village area of the park.

And in March a 50-year-old man from Hong Kong visiting the Hualapai reservation outside the park fell while trying to take pictures.

The South Rim, where Salgado Lopez died, is a popular spot for photos, particularly at sunset (stock image)

'On average, there about 12 fatalities in the park per year, but a small percentage of those are from fatal falls,' said Ceja-Cervantes at the time.

'The causes of those deaths range from heat, to drowning, to medical issues and more.

'High elevation plays a role in some of the fatalities.'

Grand Canyon National Park is one of the most popular tourist destinations in the U.S., drawing nearly 6.4 million visitors in 2018.

Grand Canyon West on the Hualapai reservation gets about 1 million visitors annually.