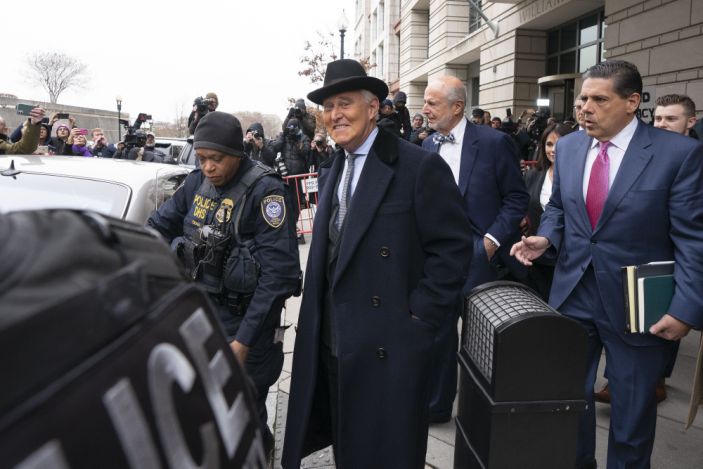 President Trump on Friday commuted the three-year prison sentence for Republican operative Roger Stone, who was to report to a federal prison on Tuesday after being found guilty of obstruction, witness tampering and lying to Congress.

By granting Stone clemency, rather than a full pardon, Trump ensures that his longtime friend will remain out of prison, though his criminal record will remain.

“Roger Stone is a victim of the Russia Hoax that the Left and its allies in the media perpetuated for years in an attempt to undermine the Trump Presidency,” McEnany said in the statement.

Hours before Trump announced his decision, the U.S. Court of Appeals for the D.C. Circuit denied Stone’s request to stay his prison sentence. Citing the risk of being infected by COVID-19 while behind bars at a federal prison in Jesup, Ga., Stone had asked the court to delay his sentence, but the court ruled he hadn’t shown that that risk was sufficient.

Stone was sentenced in February after he was convicted on charges stemming from Robert Mueller’s investigation into Russian interference in the 2016 presidential election. Stone drew the attention of the FBI because of his communications with Guccifer 2.0, a Russian hacker who released stolen Democratic National Committee emails via Wikileaks.

“Mr. Stone was charged by the same prosecutors from the Mueller Investigation tasked with finding evidence of collusion with Russia,” McEnany said in her statement. “Because no evidence exists, however, they could not charge him for any collusion-related crime. Instead they charged him for his conduct during their investigation.”

Either a pardon or clemency for Stone was widely expected. Asked about it Friday morning, the president replied: “I’ll be looking at it. I think Roger Stone was very unfairly treated, as for many people.”Story continues

Kerik celebrated the commutation of Stone’s sentence on social media on Friday even before it was officially announced.

In an interview with Fox News this week, Stone expressed confidence that Trump would spare him further time in prison.

“The president, who I’ve known for 40 years, has an incredible sense of fairness,” Stone said.