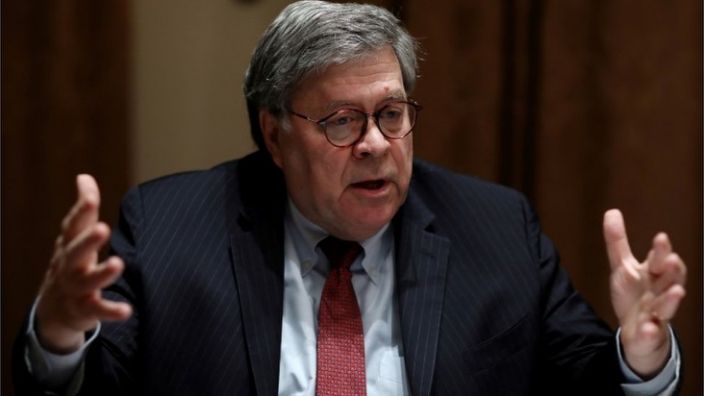 Mr Barr is the latest US official to criticise China

US Justice Secretary William Barr has accused Hollywood and US tech firms of "collaborating" with the Chinese government to do business there.

Companies like Disney routinely agreed to censor films while Google, Yahoo, Microsoft and Apple were "all too willing" to work with Beijing, he said.

His intervention is the latest criticism of China by White House and other US officials.

Tensions between the US and China have been rising over a host of issues. The US this week removed Hong Kong's preferential trade status, after China brought in a controversial new security law for the territory.

A quick guide to the US-China trade war

What might happen next in the South China Sea?

The Hong Kong crisis and the new world order

President Donald Trump has also criticised China over its handling of the coronavirus pandemic as well as its military build-up in the South China Sea, its treatment of Muslim minorities, and massive trade surpluses.

China has rejected all foreign criticism of its actions.What did Barr say about US firms?

Speaking at the Gerald Ford Presidential Museum, he warned that dependence on China for certain goods risked making the US vulnerable and said US firms were giving up secrets and compromising values under Chinese pressure.

"If Disney and other American corporations continue to bow to Beijing, they risk undermining both their own future competitiveness and prosperity, as well as the classical liberal order that has allowed them to thrive," he said.

The justice department had seen growing numbers of cases where Chinese officials were lobbying US bosses to favour Beijing's policies, he said. He urged US firms to defy Chinese demands, saying: "If individual companies are afraid to take a stand, there is strength in numbers."The US has removed Hong Kong's preferential trade status, accusing China of undermining the city's autonomy

He criticised technology companies, which he said had "allowed themselves to become pawns of Chinese influence".

He also alleged - without providing evidence - that the Chinese government was able to access Apple phones while the company had denied similar access to the US government, and that this was emblematic of a "double standard that has been emerging among American tech companies".Story continues

Apple says it does not have a back door into its phones and will not build one.

Mr Barr also praised Facebook, Google, Twitter, and LinkedIn for saying they would not comply with requests for user data under Beijing's new security law in Hong Kong.... and about China?

China's actions showed it did not want to join other industrialised economies but rather wanted to replace them entirely, he said.

Beijing sought to exploit the "power, productivity and ingenuity" of China's people to "overthrow the rule-based international system and to make the world safe for dictatorship".

China was engaged in an "economic blitzkrieg" to "seize the commanding heights of the global economy and to surpass the United States as the world's preeminent superpower", he added.'A key pillar of Trump's re-election strategy'

The Trump administration has long argued that China is taking advantage of America in trade. Mr Barr's remarks ramp up the accusation, alleging that China's ultimate goal in doing business with the US is to replace it and to become a world superpower.

Mr Barr's remarks are among a series of hard-hitting speeches by senior US officials on China, including FBI Director Christopher Wray and National Security Adviser Robert O'Brien, with Secretary of State Mike Pompeo expected to follow.

All advocating for a tougher stance against Beijing, some of these speeches were delivered in key swing states like Michigan and Arizona.

Two days ago, President Trump voiced a range of grievances against China during a Rose Garden press conference, which quickly turned into an hour-long monologue attacking his Democratic rival Joe Biden.

Campaign rhetoric and voices advocating for more hawkish policies towards China have become indistinguishable, as Mr Trump seems determined to make China a key pillar of his re-election strategy.What does China say?

Beijing has not yet responded to Mr Barr's criticism, but earlier on Thursday the foreign ministry accused the White House of unfairly targeting China.

"We know that some in the US are oppressing China and bullying China. As an independent sovereign state, China must respond to the bullying practices and we must say no, we must... take reactive moves to it," Chinese foreign ministry spokesperson Hua Chunying said.

She also responded to media reports that the US could ban Chinese Communist Party members from visiting the US, which she said were "utterly pathetic" if true.

The Communist Party is the country's sole, ruling political party.

About 7% of the population are members of the party - loyal membership is essential for those who want to climb the career ladder - and members include e-commerce giant Alibaba's Jack Ma, telecomm company Huawei's founder Ren Zhengfei and actress Fan Bingbing.What else have US officials been saying?

Mr Barr's speech follows similar warnings about the impact of Chinese activity on the US by other US officials.

Earlier this month FBI director Christopher Wray said acts of espionage and theft by China's government pose the "greatest long-term threat" to the future of the US.

He said China had begun targeting Chinese nationals living abroad, coercing their return, and was working to compromise US coronavirus research.

"China is engaged in a whole-of-state effort to become the world's only superpower by any means necessary," Mr Wray added.