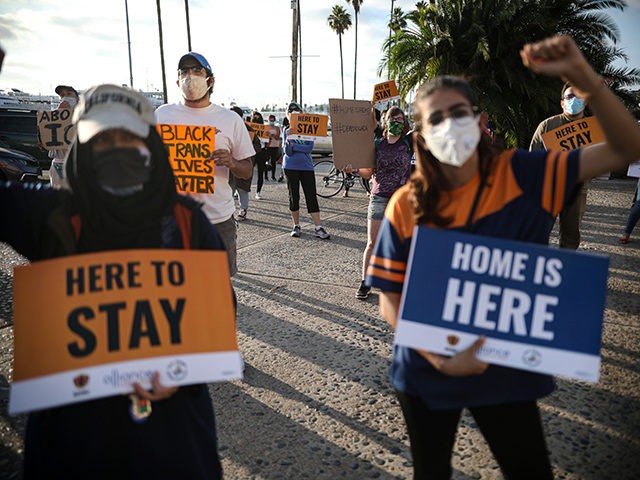 A court has ordered the Trump administration to restore the Deferred Action for Childhood Arrivals (DACA) program to its “pre-September 5, 2017 status,” effectively allowing younger illegal immigrants to apply for work permits.

The order to the Department of Homeland Security comes after the Supreme Court decided in June that President Donald Trump’s deputies had not properly ended the work permit program.

The five judges claimed that Trump and his deputies had insufficiently justified his 2017 revocation of former President Barack Obama’s system to grant work permits for roughly 800,000 illegal immigrants during the post-2008 recession.

Yet the Supreme Court’s bloc of four liberal justices — backed up by Chief Justice John Roberts — declined to say whether the president has the legal authority to award work permits to anyone. But they did agree to order Trump to restart Obama’s program.

Judge Paul W. Grimm declared: “The [2017] rescission of the DACA policy is VACATED, and the policy is restored to its pre-September 5, 2017 status.” The Maryland judge was appointed by Obama in 2012.

Grimm’s order will mean DHS must update DACA migrants’ expired work permits and to accept new applications from young illegals who have not yet been part of the DACA population.

It will also lead to DHS restarting the “Advanced Parole” process, which allows DACA illegals people to briefly leave the country and return profile for green cards via the Adjustment of Status process. The process was likely used by at least 10,000 DACA migrants during Obama’s time in office.

The Trump administration has not yet issued a re-cancellation of Obama’s DACA, as allowed by the Supreme Court.

That task likely takes time, in part, because officials must include extensive legal and political arguments to deter judges who want to strike it down. It also needs to be signed by senior officials with lawful authority.

However, White House officials are drafting an executive order on immigration and a draft bill for Congress that includes some form of DACA deal.

Spokeswoman Kayleigh McEnany said Thursday: As the President announced, he’s working on an executive order to establish a merit-based immigration system.  That will be the intent of the executive order.

But the President has long said that he would look for a legislative solution on DACA, and he would work with Congress to pursue that legislative solution, and one that could include citizenship, along with other strong border security and permanent merit-based reforms.  So that is something he would work with Congress on.  Yeah, and the executive order would pertain to the merit-based portion of that.

The statement shut down widespread reports that Trump was preparing to accept the DACA program as he tries to bump up his polls for the 2020 election.

Follow the money & the tweets through the 'dreamer' and DACA debates, and they lead to the @FWDus advocacy group, which was set up by West Coast investors to protect and expand their supply of cheap labor. https://t.co/DwL2ny8Sdd