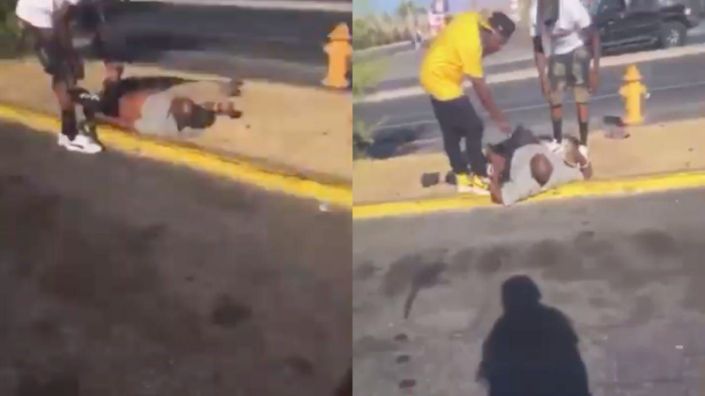 The Las Vegas police arrested a 28-year-old man who they say livestreamed himself goading a homeless man into doing a backflip for $6.

A homeless man died of a spinal injury 10 days after he was goaded into doing a backflip for $6, the Las Vegas police said.

The police arrested a 28-year-old man who they say had livestreamed the entire incident and could be heard telling viewers he offered the man cash for the stunt.

Keonte Jones was booked into a local jail on Tuesday on a felony charge of willfully disregarding a person's safety, according to the police.

The family of the 55-year-old homeless man, Larry Coner, launched a GoFundMe campaign to raise money for his funeral.

The police arrested a Las Vegas man accused of livestreaming himself egging on a homeless man to perform a backflip in exchange for $6.

The man sustained a spinal injury from the flip and died in a hospital 10 days later, authorities said.

Keonte Jones, 28, was booked into the Clark County Detention Center on Tuesday on a felony charge of willfully disregarding a person's safety.

The deadly encounter began June 20 when the homeless man, 55-year-old Larry Coner, approached Jones to ask for money, according to a statement from the Las Vegas Metropolitan Police Department.

Jones then offered Coner the money in exchange for a backflip, the statement said.

A disturbing Facebook video linked to by the police department shows Coner cartwheeling several times before attempting a back handspring and landing directly on his neck.

The #LVMPD arrested a man who paid for a dangerous stunt that led to a homeless man’s death. Caution: the video of this incident is disturbing.https://t.co/PxkzfjGpBF pic.twitter.com/qzdiS7ug3P

Throughout Coner's attempt, and in the minutes afterward, a man — identified as Jones — could be heard laughing raucously. He said multiple times that he had offered Coner $6 for the stunt.

The person filming approached and brandished the cash at Coner, who lay on the ground, apparently unconscious.

"He landed on his head. I told him $6," the man said, still roaring with laughter, while Coner remained motionless.

"As the incident went live on Facebook, Jones continued laughing and filming Coner for almost 10 minutes while telling onlookers not to call medical," the police said. "Medical responded and Coner was transported to [University Medical Center] with a serious spinal injury. On June 30, 2020, Coner died as a result of his spinal injury."Story continues

The police said they began investigating the incident after a member of Coner's family contacted them. Coner's sister has also launched a GoFundMe campaign to raise money for Coner's funeral.

In the page description, Coner's sister said Coner had a mental illness that had gotten progressively worse since his mother died in 2018. She added that he had been walking home from the hospital, "minding his own business," when the deadly encounter happened.