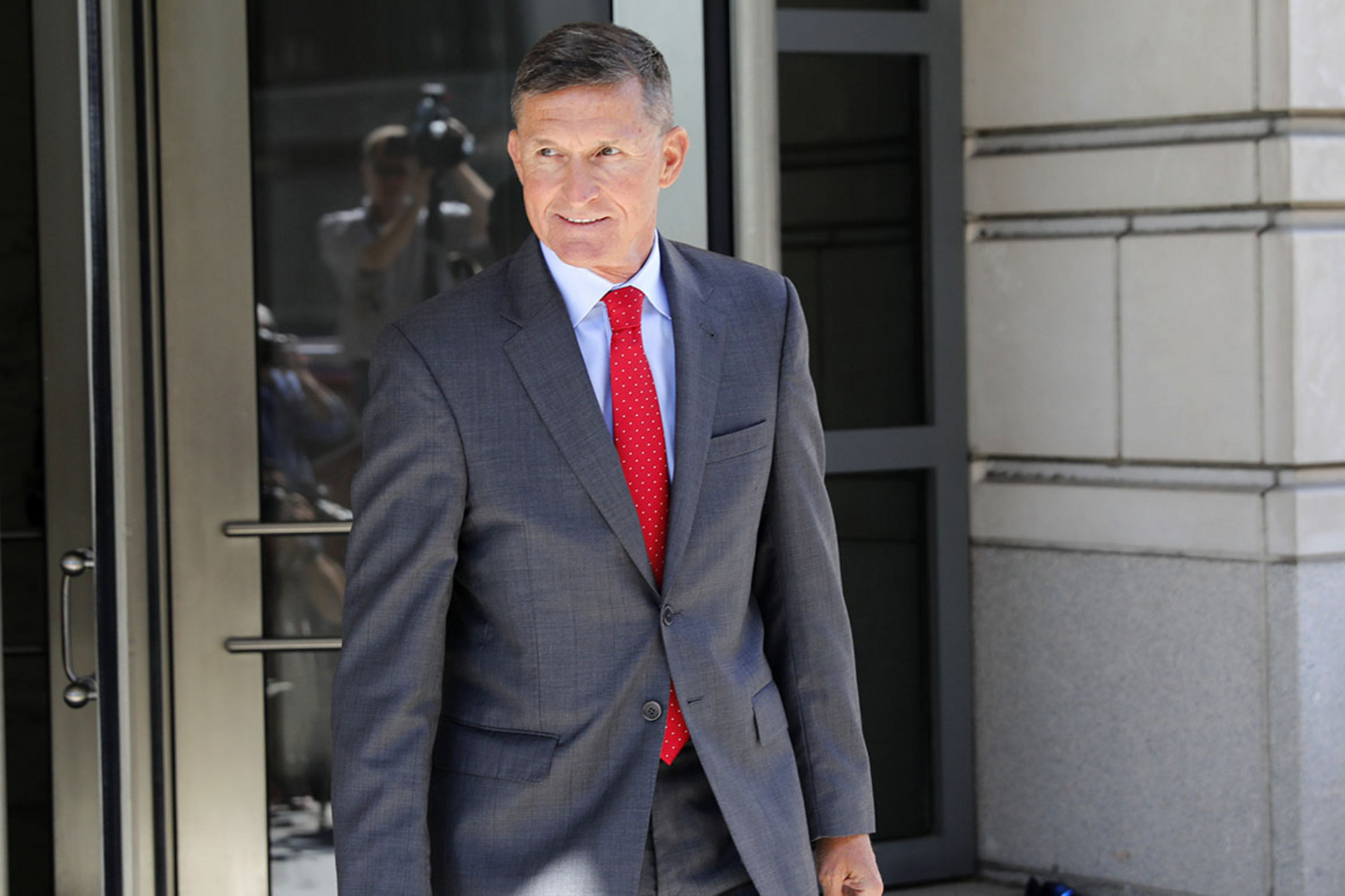 The Justice Department has abandoned its prosecution of President Donald Trump’s former national security adviser Michael Flynn, throwing in the towel on one of the most prominent cases brought by special counsel Robert Mueller.

The move represents a remarkable reversal two and half years after Flynn initially pleaded guilty to the FBI about his dealings with the Russian ambassador to the U.S. In that time, the case has taken a number of dramatic turns: Flynn went from the precipice of being sentenced in 2018, to abruptly switching legal teams in 2019, to trying to withdraw his guilty plea in 2020. Flynn's attempt to take back his plea led Attorney General William Barr in January to assign a federal prosecutor to review the case.

It was that review that led to the move on Thursday to dismiss the case altogether. Department officials, including Barr, concluded in light of recently disclosed evidence that the FBI’s questioning of Flynn just four days after Trump’s inauguration lacked a proper investigative basis. Flynn admitted in front of two federal judges that he intentionally lied during that interview about his dealings with the Russian ambassador, but the retired U.S. Army lieutenant general formally retreated from those admissions in January.

"A review of the facts and circumstances of this case, including newly discovered and disclosed information, indicates that Mr. Flynn’s statements were never 'material' to any FBI investigation," read the motion filed Thursday seeking to dismiss the criminal prosecution.

The decision swiftly reverberated across Washington, where it is likely to have ramifications for the president's political fortunes, Barr's standing within his own Justice Department and Mueller's legacy.

Trump, who had long complained that Flynn was being railroaded, hailed the development and wasted no time before making clear he wants to turn the tables on FBI and former Justice Department officials he believes corruptly went after Flynn.

“He was an innocent man,” Trump declared. “He is a great gentleman. He was targeted by the Obama administration and he was targeted in order to try and take down a president and what they’ve done is a disgrace and I hope a big price is going to be paid. A big price should be paid.”

Trump tied the prosecution of Flynn to the broader investigation into the Trump campaign and Russia, even arguing Thursday that those who probed the issue were guilty of “treason.” It had been widely expected Trump would pardon Flynn to prevent him from having to go to prison. But Barr's move relieves Trump of that decision and may have headed off the political blowback the president would have faced for issuing such a pardon.

Former FBI Director James Comey — who launched the investigations into Flynn and other Trump campaign advisers in 2016 — decried the decision to abandon the Flynn case, but urged those working at the Justice Department not to quit.

“The DOJ has lost its way. But, career people: please stay because America needs you. The country is hungry for honest, competent leadership,” Comey wrote on Twitter.

"Today’s move by the Justice Department has nothing to do with the facts or the law — it is pure politics designed to please the president," added McCabe, who was a target of Trump's ire and eventually fired moments before his scheduled retirement over a media leak he authorized. McCabe is suing the department over his dismissal.

On Capitol Hill, Republicans preached vindication while Democrats decried a miscarriage of justice. House Judiciary Chairman Jerry Nadler said he would request a DOJ watchdog investigation and call Barr to testify about the decision.

"The integrity of our criminal justice system is at stake, and the American people deserve answers," the New York Democrat said in a statement.

The move to dismiss the case was approved by Barr at the urging of Jeffrey Jensen, the U.S. Attorney in St. Louis, whom Barr assigned in January to conduct a review of the case.

"Through the course of my review of Gen. Flynn’s case, I concluded the proper and just course was to dismiss the case," Jensen said in a statement. "I briefed Attorney General Barr on my findings, advised him on these conclusions, and he agreed."

FBI records turned over to the defense last week as part of Jensen’s review — made public in court filings — showed bureau officials were in the process of closing a counterintelligence investigation into Flynn in the first few days of January 2017. But they nixed those plans after learning of intercepts of Flynn’s conversations with the Russian ambassador.

The filing seeking to drop the criminal case said those conversations were not a sufficient basis to keep the Flynn probe open.

“Even if he told the truth, Mr. Flynn’s statements could not have conceivably ‘influenced’ an investigation that had neither a legitimate counterintelligence nor criminal purpose,” Shea’s submission says. “A review of the facts and circumstances of this case, including newly discovered and disclosed information, indicates that Mr. Flynn’s statements were never 'material' to any FBI investigation.”

The 20-page Justice Department explanation for its decision to walk away from the Flynn case was accompanied by a slew of exhibits, including previously undisclosed FBI interviews with senior Obama Justice Department officials, including former Deputy Attorney General Sally Yates, who was acting attorney general in the early days of the Trump administration, and former National Security Division head Mary McCord.

The interviews suggest much of the wrangling over Flynn inside the outgoing administration was driven by territorial disputes.

Comey repeatedly insisted that the FBI had to protect the secrecy of an ongoing criminal investigation, while intelligence officials and DOJ leaders, including Yates, emphatically urged informing the incoming Trump adinistration that Flynn had lied about his interactions with the Russian ambassador. Those concerns were compounded when Vice President Mike Pence repeated Flynn's incorrect information during a national television interview.

In a summary of her own interview about the matter, Yates indicated that she spoke to Comey, who raised the prospect that Pence himself was aware of Flynn's lie.

"The DOJ response was that they shouldn't assume the vice president was aware and knowingly lied," according to the record of Yates' interview. She also indicated she felt the FBI's position was based in part on a desire to maintain a good relationship with the Trump administration.

But when Sean Spicer, the new White House press secretary, repeated the erroneous information shortly after Trump's inauguration, Yates consulted with national security division lawyers and resolved to inform the White House about Flynn's conversations with Kislyak. When she informed Comey of the decision, he told her FBI agents were already on their way to interview Flynn.

While Trump called Flynn "innocent," the Justice Department submission stops just short of that. It does suggest that Flynn's statements to the FBI were not the kind of clear-cut lies that prosecutors seek to prove in court.

"The Government is not persuaded that it could show that Mr. Flynn committed a false statement under its burden of proof," the filing said. "The statements in question were not by their nature easily falsifiable. In his interview, Mr. Flynn offered either equivocal ('I don’t know') or indirect responses, or claimed to not remember the matter in question."

Notably, the bombshell court filing Thursday asking U.S. District Judge Emmet Sullivan to toss out the case bore the signature of only one prosecutor: U.S. Attorney for the District of Columbia Timothy Shea, a former Barr aide named to the post in January.

Moments before Shea's filing, the top prosecutor in the Flynn case, Brandon Van Grack, withdrew abruptly and without explanation. Van Grack had served as one of special counsel Robert Mueller's top lawyers and remained on the Flynn case even after Mueller's office closed down. He signaled his exit from the case in a terse, one-sentence filing with U.S. Sullivan.

In another sign of discord, the prosecutor who handled the matter alongside Van Grack over the past year, Assistant U.S. Attorney Jocelyn Ballentine, did not sign the filing seeking to drop the case. She did, however, appear to be the one who actually filed the document electronically with the court.

After switching defense teams last year, Flynn began leveling a series of increasingly strident attacks at the prosecution, culminating in a motion in January to withdraw his guilty plea altogether. Later, Flynn's attorneys moved to have the case dismissed altogether on the grounds of egregious government misconduct.

In recent weeks and months, Flynn's defense — headed by Texas lawyer Sidney Powell — had escalated its attacks on Van Grack personally, alleging that he withheld evidence favorable to Flynn in defiance of an order from Sullivan requiring the prosecution to turn over such material.

Van Grack was the only member of Mueller's prosecution squad to take up a Justice Department leadership position after the Russia probe closed down, assuming a role last March overseeing the department's enforcement of the foreign-agent registration laws and other efforts to combat foreign influence in the U.S.

A Justice Department spokeswoman said Thursday afternoon that Van Grack was still working in that position. The court filings he submitted Thursday bore his title as chief of the Foreign Agent Registration Act Unit.

The filings did not indicate whether Van Grack was directed to withdraw from the Flynn case or elected to do so. He did not respond to messages Thursday seeking comment.

The dismissal of the case is subject to Sullivan's approval, but the Justice Department's filing Thursday suggested that should be more or less a formality. It would be extraordinary for a judge to order prosecutors to proceed with a case they are seeking to drop.

Trump personal lawyer Jay Sekulow said the Justice Department move amounted to an indictment of Mueller and his team.

"Justice has been served. The actions of the special counsel against Gen. Flynn were outrageous," Sekulow said. "The special counsel should be ashamed of the conduct of his agents and lawyers that he allowed. The attorney general and the Department of Justice are correcting a horrible wrong."

Trump also used the occasion of the Justice Department action to lash out at the press, particularly reporters who he viewed as complicit in amplifying a storyline about collusion between the Trump campaign and Russia.