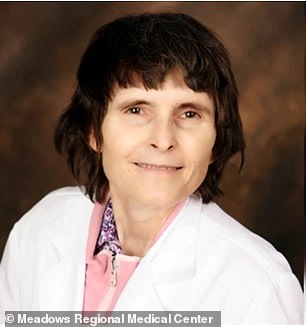 A Georgia doctor has been found dead in a ditch after she was attacked and killed by a pack of dogs.

Dr Nancy Shaw, 62, was found dead by the side of a road in the small town of Lyons, southeast of Atlanta, in the early hours of last Thursday.

A police officer patrolling the area found Dr Shaw's car abandoned on the road with the engine still running and the door open.

Her body was found in a ditch nearby.

Police immediately recognized her as a long term doctor at the Meadows Regional Medical Center.

Authorities say she was killed by a pack of dogs that were seen roaming the area.

It is not yet clear what caused Dr Shaw to get out of her car.

Authorities have not yet revealed the extent of Dr Shaw's injuries but said they were consistent with an animal attack.

'We are actively trying to locate some dogs that were seen running loose in the area around this same time to see if there is any evidence of that,' Lyons Police Chief Wesley Walker told local outlet Southeast Georgia Today.

'We do believe that a couple of the dogs do have collars on so we feel like they did belong to someone but haven't had any luck yet.

'We've asked for the medical examiner to do an autopsy to cover all the bases but it appears it was from injuries from an attack of an animal.'

Police say Dr Shaw would often stop by the local police station to make sure the officers were all healthy.

'When I realized who it was it was devastating.'